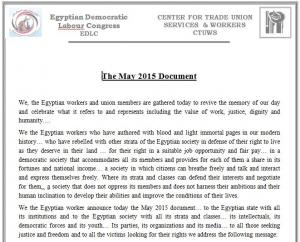 We, the Egyptian workers and union members are gathered today to revive the memory of our day and celebrate what it refers to and represents including the value of work, justice, dignity and humanity….

We the Egyptian workers who have authored with blood and light immortal pages in our modern history… who have rebelled with other strata of the Egyptian society in defense of their right to live as they deserve in their land … for their right in a suitable job opportunity and fair pay… in a democratic society that accommodates all its members and provides for each of them a share in its fortunes and national income… a society in which citizens can breathe freely and talk and interact and express themselves freely. Where its strata and classes can defend their interests and negotiate for them.. a society that does not oppress its members and does not harness their ambitions and their human inclination to develop their abilities and improve the conditions of their lives.

o   The societies of security, stability and democracy that Egyptians strive for is necessarily the society in which a person finds suitable work… work for a fair wage in light of just working relations and safe and health conditions that preserve his pride, makes him feel safe and launches his abilities and energy… a society that shades its members with protection and guarantees them the right to food, treatment, suitable housing, and a clean and safe environment. A society that provides equal opportunities for all Egyptians in education, employment and promotion… the right of all Egyptians in their fortunes and natural resources with what this right entails such as practicing supervision over it, benefiting from it and enjoying it… in achieving social balance  and some justice in distributing the national profit and bearing the burden and social responsibility.. in protecting the weaker strata socially and providing them with the opportunities necessary for empowering them.

o   Moving to an Egypt that is safe and democratic cannot be achieved without restoring some sort of social balance… without reclaiming those marginalized outside society – economically, socially and culturally- into it so that they become real stakeholders in its stability, regularity and security… without achieving a degree of social justice that guarantees for the majority of the Egyptian people an honorable living and a suitable job opportunity… and open up to the everyone the doors of hope that felt impossible to them. And so that it becomes possible to step towards social justice… towards a degree of balance between rights, interests and chances to live and make a living… we have to open the space for the tools of societal dialogue and social negotiations… to provide the possibilities of expression and defending interests and negotiating to provide a sane degree of balance between the contradicting interests.

o   The freedom for which blood was she was never just a song on television or a change of the majority in parliament. True democracy for which the Egyptian people rebelled, asking for it, is not just elections or representative institutions… it is independent unions and civil society organization. Organizations in which worker and social strata organize themselves to express their immediate interests and press for the achievement of their demands. They are effective and democratic mechanisms for social negotiation and participation in decision making… mechanisms for effective social supervision of societal resources hat have been wasted in the miserable years in which all supervision was absent and when the conscience and logic of society was absent with the absence of democracy.

o   The Egyptian workers who were deprived for tens of years from their right to for their unions and whose organizations and union movement was stolen from them… the Egyptian workers who suffered uncountable injustices… unemployment, low wages, lack of job security, temporary working contracts that have become the dominant formula in all sectors… work disputes that do not get resolved… demands that face a dead end and therefore can only be expressed through strikes or demonstrations or movements of dissent… the only way that the workers and employees and everyone who works for a wage is able to resort to force negotiations – the only way for this in the absence of the supposed mechanisms … in this void that can only be filled with effective democratic unions.

o   The Egyptian workers which have always refused to be represented though this governmental organization “the general union of Egyptian workers” which was never anything but one of the state institutions and part of the system of tyranny and homogeny…they cannot today –especially- accept this type of representation after this organization has lost all its nominal “legality”… there is nullity in all of its sub organizations since the beginning of the union term through the verdict of the higher administrative court number 661 and 708 for the year 48 and the administrative court verdicts number 1827 and 3469 and 4328 for the year 61 that are verdicts according to which the cabinet in its session number 20 that met on 4/8/2011 decided to annul the board of the Egyptian general workers’ union… after wards a verdict was issued by constitutional court number 220 for the court year 19 that ruled that article number 11 of the minister of labor’s decision number 149 for the year 1996 was unconstitutional… consequently the formation of the boards that are supposed to be elected according to these procedures are null. Additionally these null formations no longer exist since the beginning of the term. Consequently to the annulment of the board of union and the boards of the general unions they have been reformed in imaginary general assemblies to replace the members with others who had not been elected and for whom the union term has been extended repeatedly year after year until it is now in its ninth year while the workers in most of the governmental departments and the public work units are members in the “semi official” institution and their subscriptions and automatically deducted from their salaries without them having the right to elect or be nominated to these formations... while this illegitimate organization monopolizes the money and assets of Egyptian workers that have come to it through decades of tyranny and taking over the will of the workers and their right to manage their money.

o   Despite the fact that the Egyptian workers who have long been deprived of their genuine democratic union rights – they were able- after the revolution – to usurp some of their union freedoms of which there was a ministerial declaration on the 12th of March 2011… the practice of union freedoms remains facing extreme difficulties on the ground and faces brash attritions…workers are sacked due to belonging to independent unions and union councils that are fired in their entirety… the governmental administrations would interfere directly against independent unions and would pressure workers to withdraw from them and join the General Union of Egyptian Workers. Tens would lose their work and only livelihood for practicing their legitimate democratic rights while legal protection is denied them with the pretext that the awaited law for new union organization has not yet come out. The possibilities of group negotiations between the parties to the work would stumble in light of the twisted conditions of the unions and the continuation of the ill reputed law number 35 for the year 1976 that was supposed to have been cancelled with the revolution against the former regime… it was clear to everyone that there were some attempts to get rid of the obligation towards union freedoms in the announcements about entering some amendments to the law project that is being viewed by the cabinet and the legislative reform committee.

We therefore announce this document and assert that the Egyptian labor movement was and still is a genuine social movement deep rooted in the modern Egyptian history and intertwines and intersects in many points and moments with the democratic national movement… it is the movement that incidents of privatization mixed with corruption and which did not stop demanding social justice in addition to its democratic struggle in defense of their right to an independent union organizations… calling onto all the sectors of the Egyptian society and its lively and democratic powers to support them and struggle with them to bring down all legal restrains that delay the emancipation of their unions and the development of their independent democratic organizations and stress that the true independent unions are not the concern of the workers alone.

It’s the pressing need of the Egyptian society as a whole to be dedicated and to organized and one of its most important effective tools that could be used to exceed the point of imbalance that it had gotten to under the weight of the tyrannical regime.

Therefore.. the workers and union personalities, signatories to this document stress their just demands that follow:

·         Guaranteeing the right of unions to amalgamation or separation and the right of workers in the business sector and private sector and all units to have independent unions and conduct their elections while preserving all their rights.

·         The right of workers who are sacked from work because of their union related activities or for representing the workers to return to work and claim their rights.

·         Activating the equal pay rule for equal value work and the regular direction towards equality between workers in the different ministries, in applying court verdicts and the generalization of verdicts that come out to the benefit of some individuals on all those similar to them without waiting for each of them to get a verdict and reimbursing the money deducted from workers unfairly and in retrospective.

That Egyptian workers understand that the achievement of some of these demands may require some time but that they demand a societal and democratic negotiation about it that ends in clear agreements that acknowledge rights and are announced in transparency and include a schedule for their implementation.